Years ago I read Always Anjali by Sheetal Sheth. It was the book I wish I had for myself or even my daughters. Such a delight to see a South Asian character-driven story about a young girl wanting to feel like she fit in. In this story it meant finding a license plate with her name. Ironically, my older daughter’s name is Anjali and even though she was “too old” to read picture books (in her mind only) she loved it. Shalini my younger daughter was appalled at how the author miraculously got all of didi’s characteristics in that book. Shalini is now on the search for a book with her name in it. 🙂

It gives me great pleasure to tell you that @mangoandmarigoldpress is launching its twentieth book and second book in the Anjali series, Bravo Anjali. This marks the first ever children’s picture book series featuring a South Asian hero! (psst … that means there’s a third book in the works too!)

For Anjali, playing the tabla is something that comes naturally. She loves the feel of the drum beneath her fingers and getting lost in the music. But when the boys in her class give her a hard time for being better than them, she messes up on purpose. When her teacher announces a contest where the winner will get to perform with him at his next concert, Anjali is perplexed. Winning the contest would be a dream for Anjali. But it seems like the better she gets, the meaner some of the kids are. In this follow up to Always Anjali, Anjali realizes that she should never let anyone make her feel bad for being good at something. An important story for all children to remember to ‘never dim their light.’

With this launch, @mangoandmarigoldpress is also continuing our #1001DiverseBooks program to help not only bridge the diversity gap but also the accessibility gap in children’s literature. With each new book launch, Mango and Marigold Press is committed to also raise the funds to donate 1001 books to literacy and advocacy nonprofits that are working across the country to help those in need.

And what would a cover reveal be without some goodies!? Check out this AMAZING swag you can get when you order in the next couple of weeks:

Here is what folks are saying:

My kids and I love “Bravo Anjali!” I wish I’d had a book like this when I was a kid. I never saw myself represented in the books I read as a brown girl learning and performing a classical Indian instrument. It’s full of small, sharply observed moments that caught at my heart for how they detail the myriad ways we make ourselves small and silent. I wanted to cheer for Anjali as she let her light shine in all its glory. – Anoushka Shankar, Sitarist and Composer

In this gorgeously rendered tale, our beloved Anjali learns something it took me thirty years to understand: there’s nothing wrong with shining brightly. I will carry the heart of this book with me wherever I go.- Nic Stone, American New York Times best-selling author of Dear Martin

The expected ship date is September 2021.

And now time for the cover!! 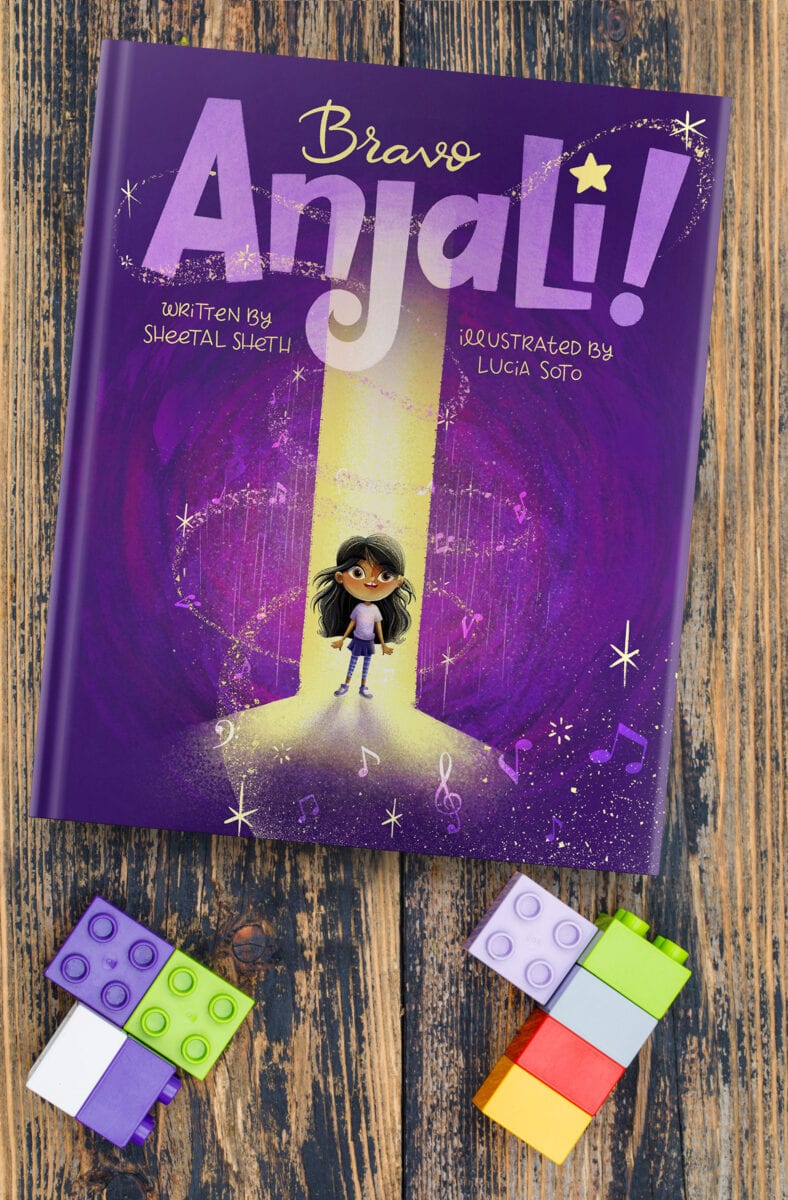 Sheetal Sheth:
Sheetal Sheth is an acclaimed actress, producer, author, and activist. She is known for her provocative performances in a wide range of memorable roles on film and television. She has starred in over 20 feature films and many TV shows and is a favorite in the independent film world, having won five best actress awards on the film festival circuit. She has earned a loyal, international following. Sheetal began her career at a time when few South Asians were making their living as actors. Despite being told she’d have to change her name to work, her successful career has trail-blazed paths for other women of color across media. Sheth supports marginalized communities not only through her own pioneering work as an actor, but by also appearing at workshops and panels and speaking directly to issues facing those communities. She is known as an outspoken advocate and has delivered talks and keynotes at festivals and charity galas. She’s had op-eds published on CNN, The Daily Beast, and Thrive Global. She served in President Clinton’s AmeriCorps and is currently on the advisory board of Equality Now and an ambassador for CA First Partner, Jennifer Newsom’s, The Representation Project.
IG: @beneaththesheetz
Twitter: @sheetalsheth

Lucia Soto:
Lucia was born in a seaside town in northwestern Spain and grew up in a sunny town in the Mediterranean. She has lived in different places and is now based in London, where she lives with her husband and a tiny palm tree. She went to Art School graduating in Design and Plastic Arts and, after a few years working as an Art Director in a busy advertising agency, decided to pursue her lifelong passion for drawing and she has never looked back.

She is interested in people and their stories through time and this is a major influence in her work. She finds inspiration in art and illustration from the early 20th century, vintage travel magazines, and the light of the Mediterranean as the landscape of her childhood.

Aside from drawing, Lucia loves Julie London, Art Deco, overdressing, and walking everywhere. She spends her days drawing things that are half nonsense and a half all sense, the stuff that makes her life silly and beautiful.
IG: @luciasoto_com