Phyllis arrived on a sunny afternoon on March 23rd and she was a little pooped. The little groundhog has been busy traveling all over the world: Mojave desert, San Antonio, Missouri, Philadelphia, Texas, France, and many other places. Click here to see her World Tour.

We were all very excited that she could visit us here in Silicon Valley (San Jose, CA). First order of business was to get rested up before her big day tomorrow. Here she is enjoying some shut-eye with a few friends. 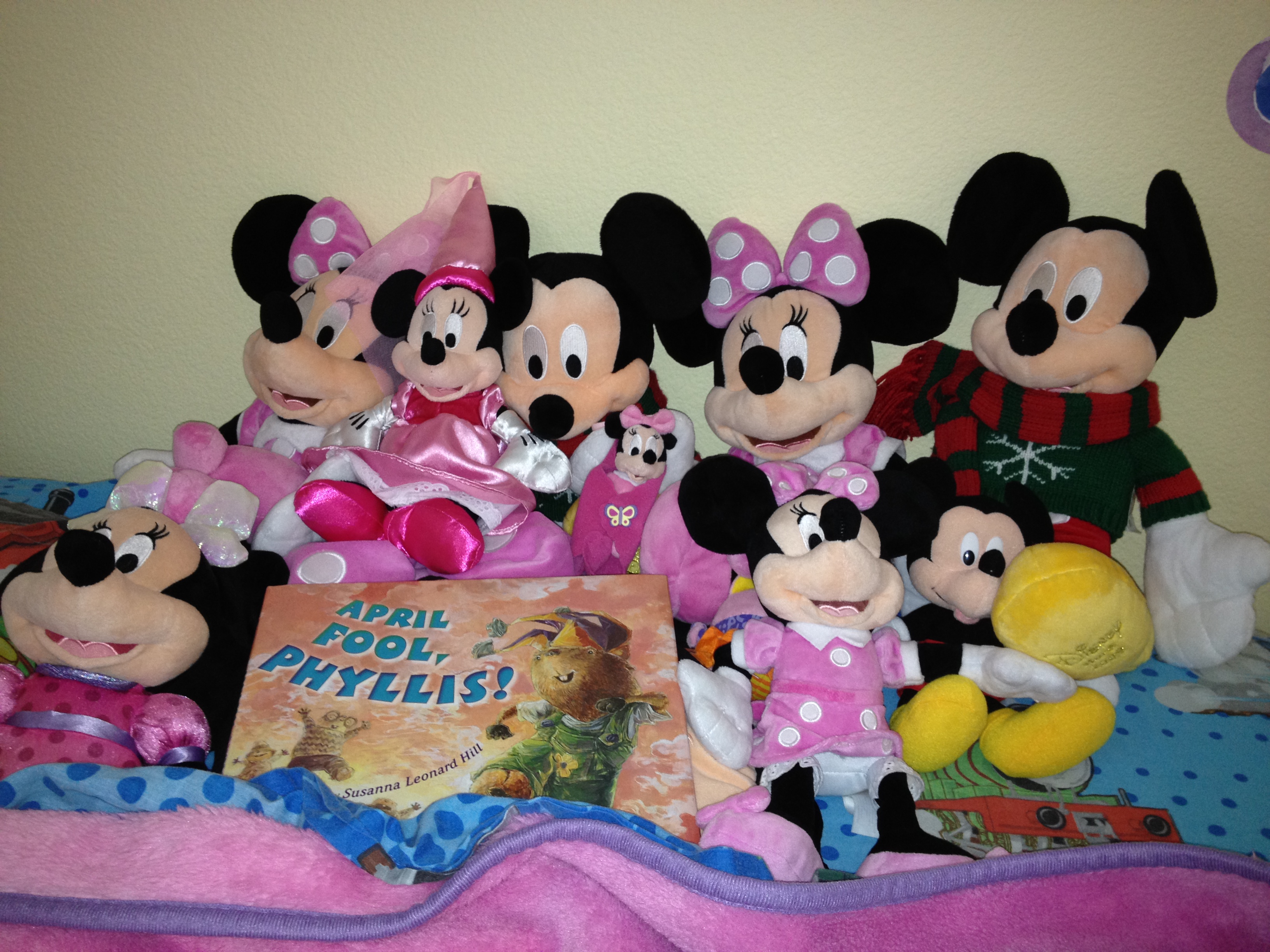 Rise and Shine. Phyllis is a weather hog and fairly good at predicting the weather. She is way better than our silly weather clock. Phyllis knew the temp was only 47 degrees even though the clock said 66 degrees at 9am in the morning. 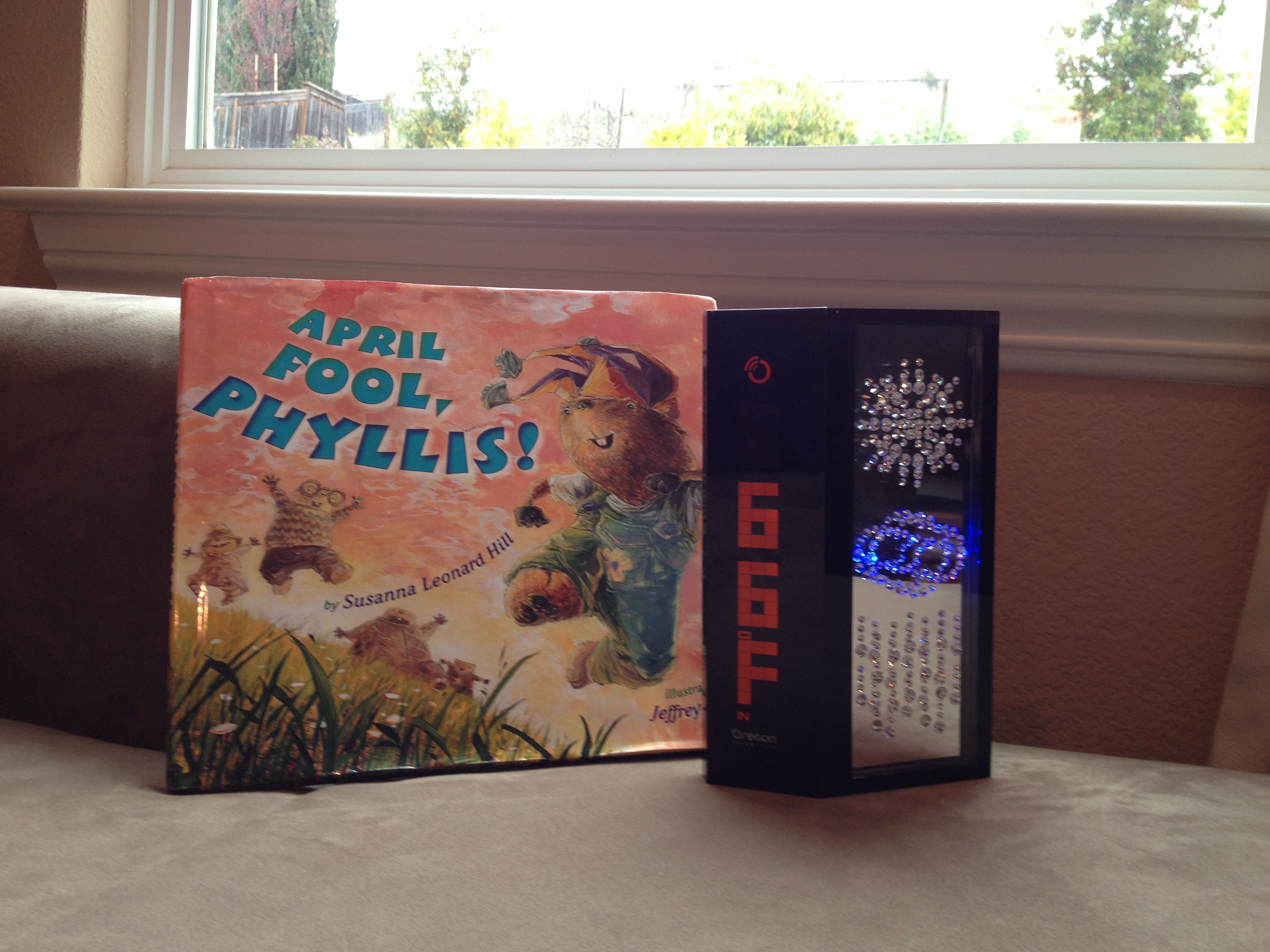 Phyllis knew that human meteorologists need to use computers to model weather patterns and make forecasts; they don’t have her special weather predicting abilities. Since we were in Silicon Vally, we visited the Intel Museum and learned a little about micro-processors and semiconductor chips in general. 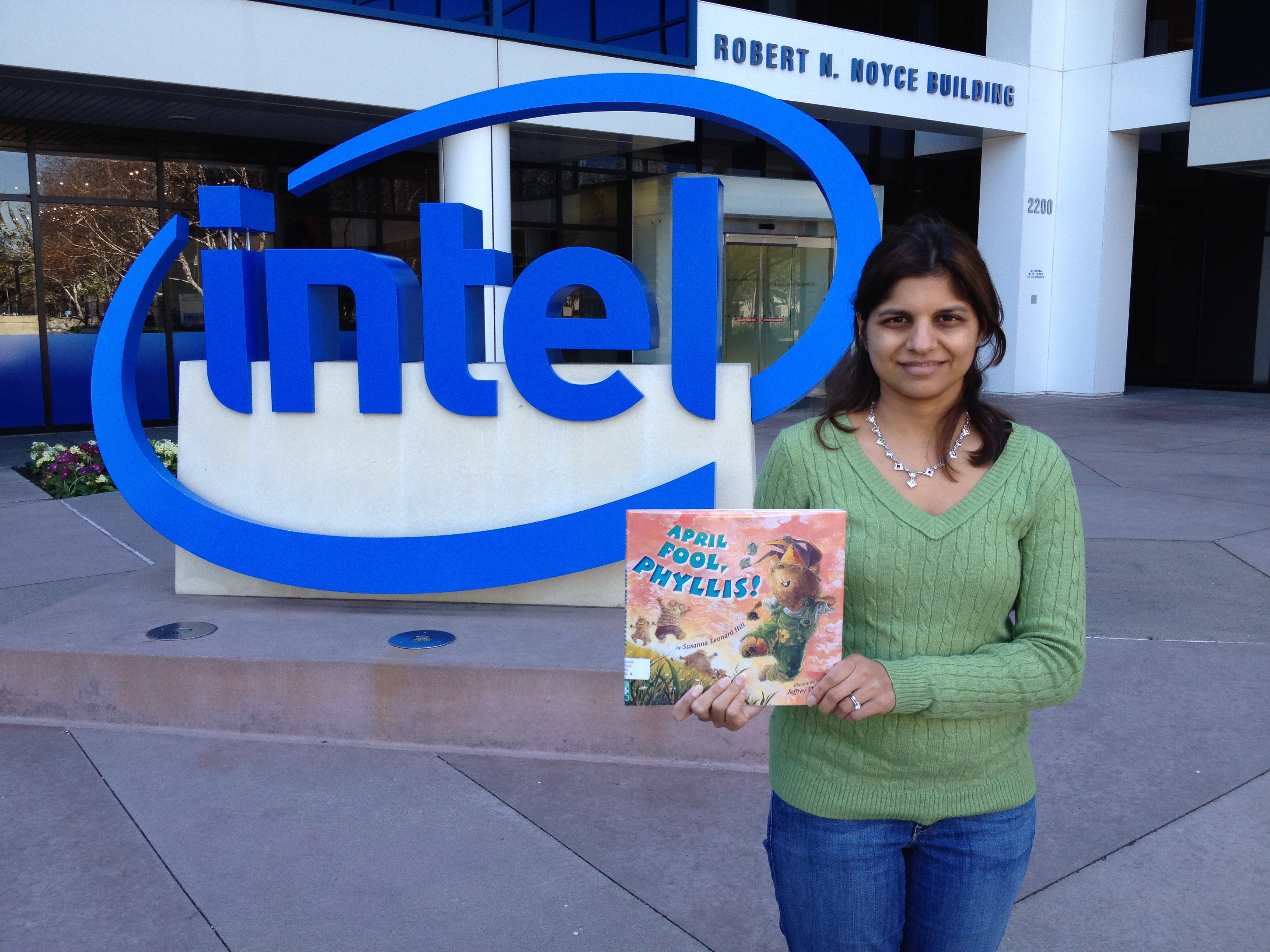 Phyllis wanted to know why the San Jose and surrounding areas are known as Silicon Valley. This area is home to a large numbers of semiconductor companies. Semiconductors chips exist in every electronic gadget TVs, cellphones, cars, computers, and many more. Intel is famous for developing some of the first mainstream micro-processors, which became the brains of the IBM personal computers (PCs) back in the early 1980’s. 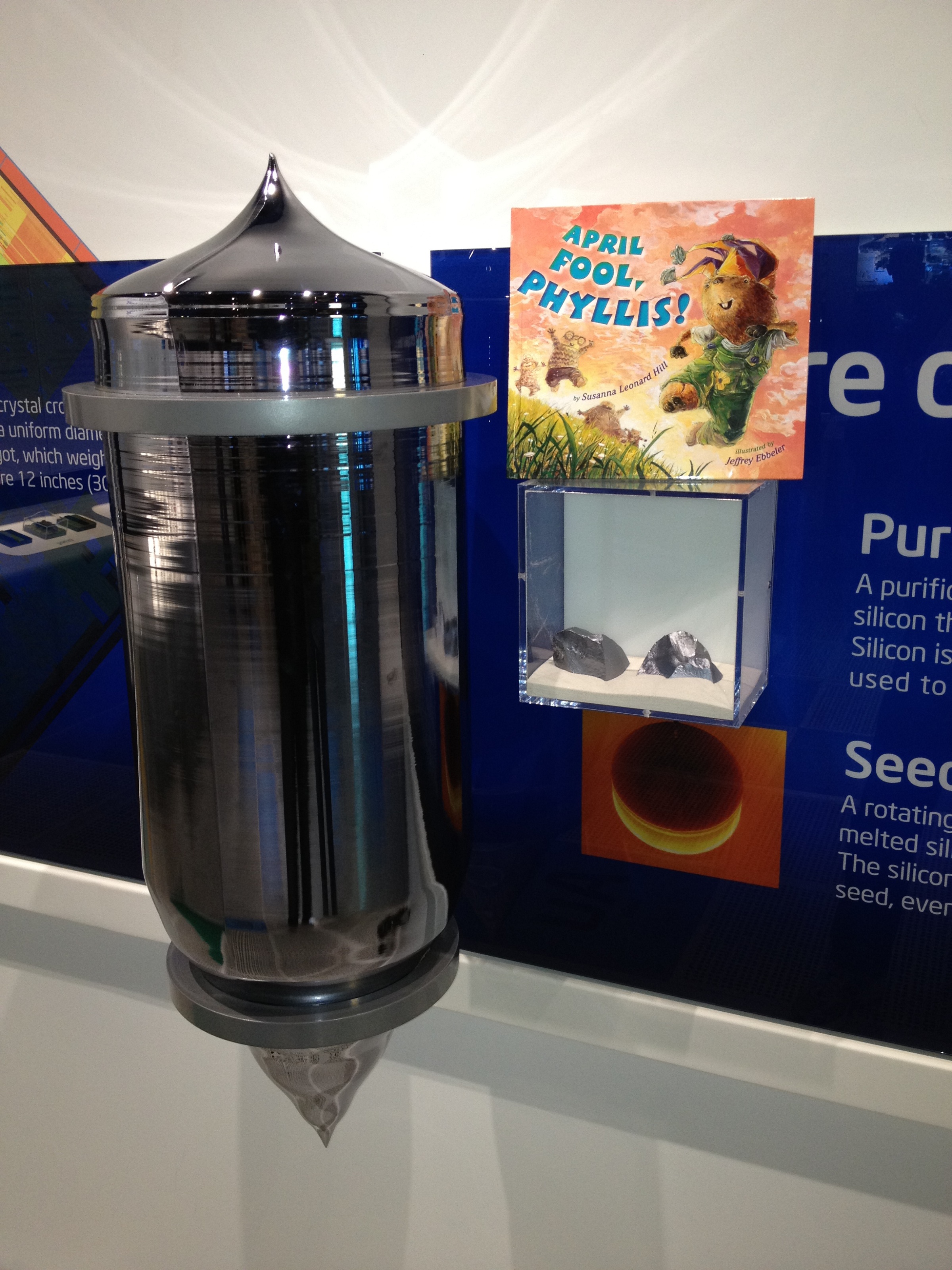 After that the layers of other material are deposited onto the wafer. In the picture below, each layer is shown with a different color. These layers are building the circuits that make-up the micro-processor. 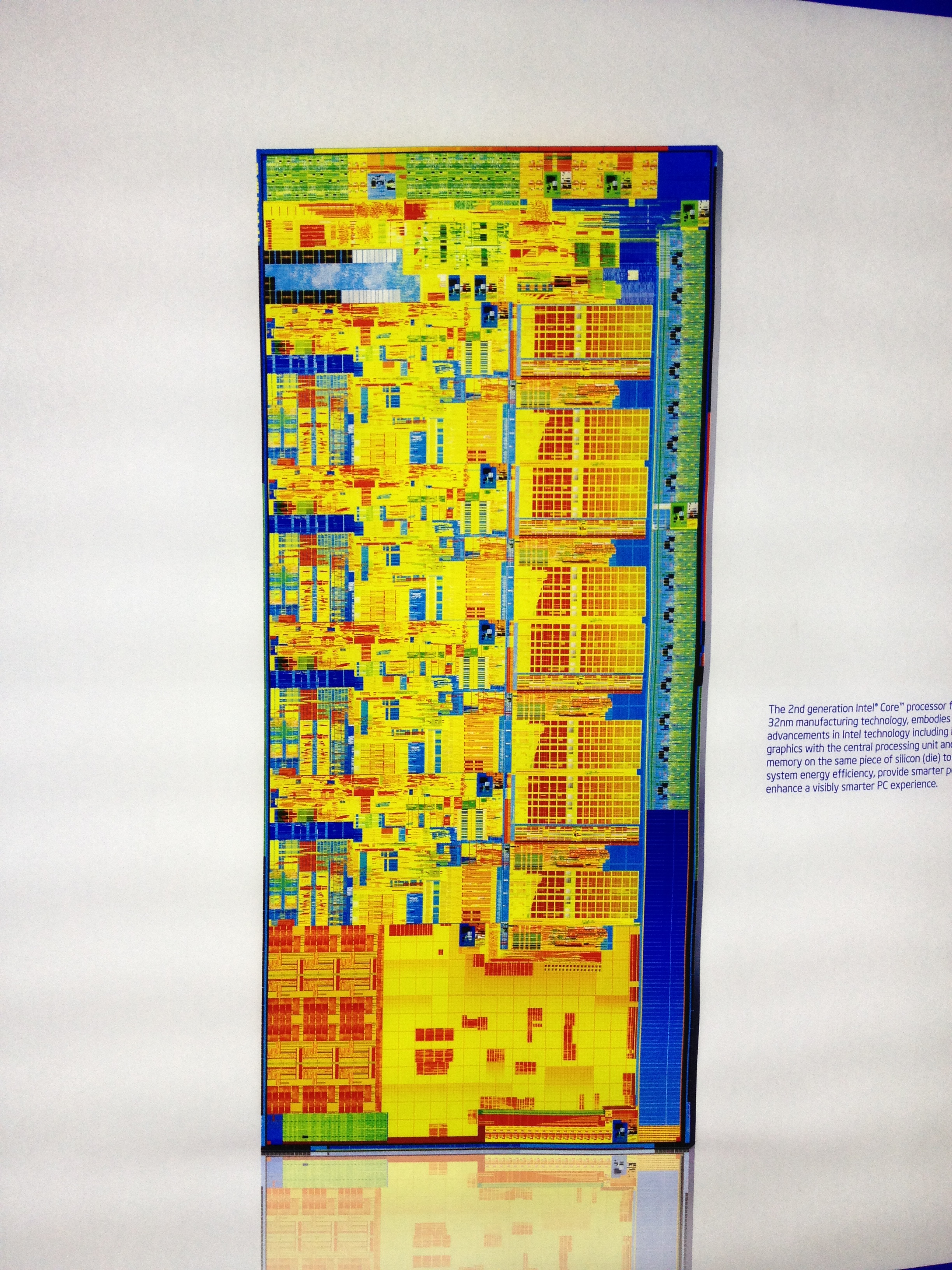 Phyllis’s head began spinning after learning all of this. So we decided to dress-up in bunny suits and have some fun. Semiconductor workers have to be covered from head to toe, since even a spec of dust can ruin a semiconductor chip. Rooms were wafers are processed are called “clean rooms”. 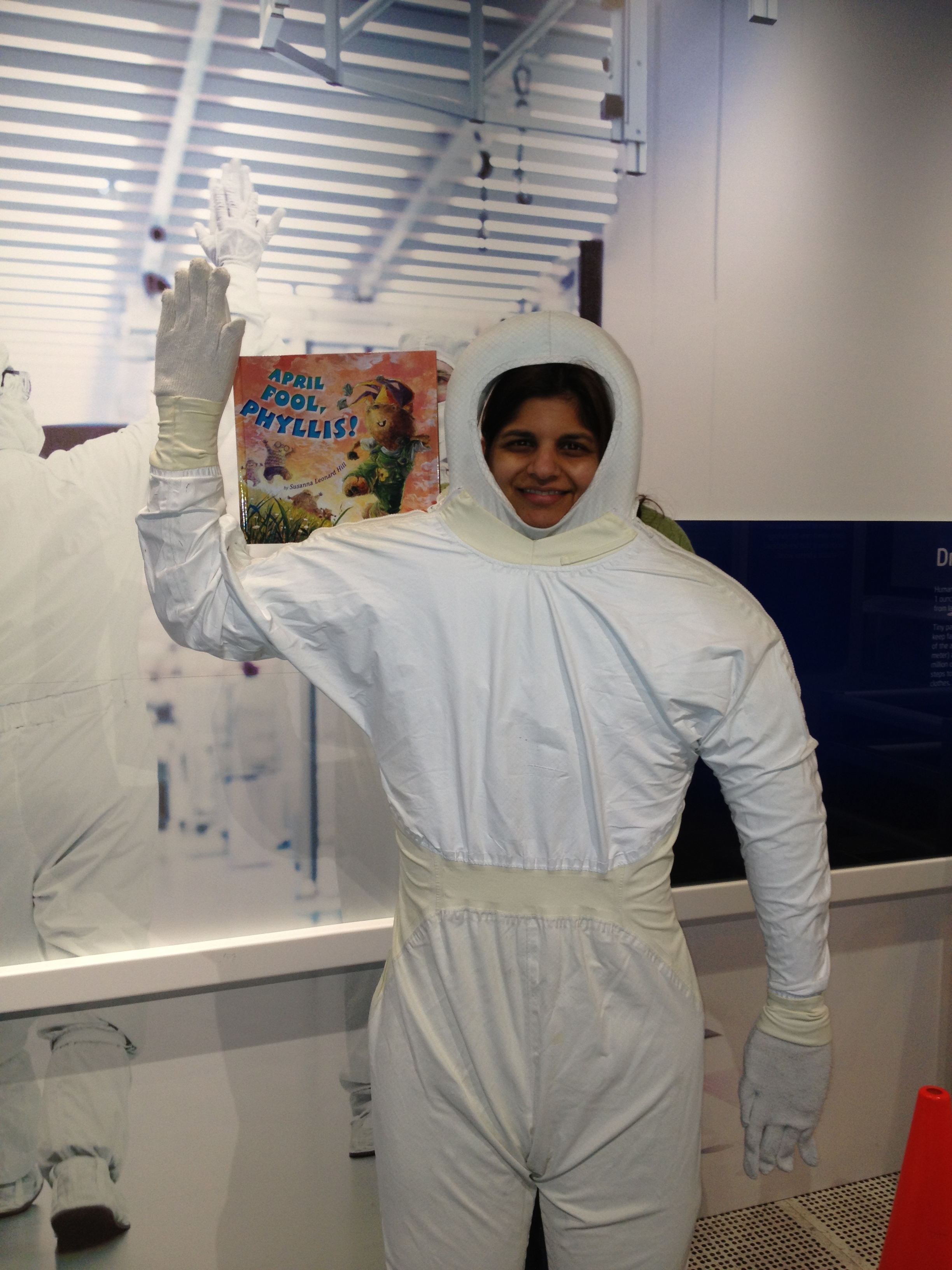 Phyllis wanted to wear a bunny suit too. 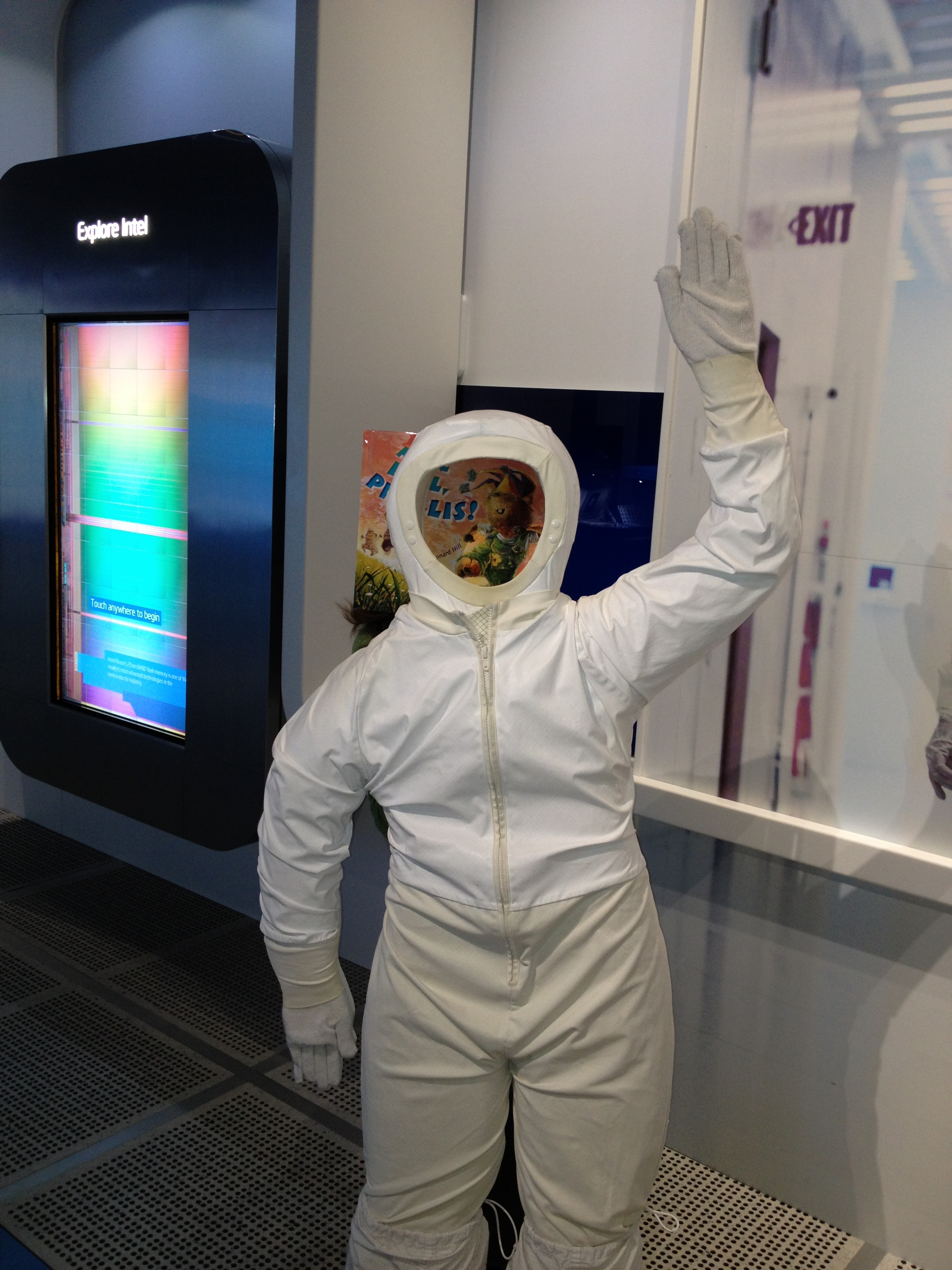 Everything here is measured in nanometers, the metric used in chip design. A nanometer is one billionth of a meter. Phyllis was happy to know she was quite large by Silicon Valley standards, almost 500 million nanometers tall! 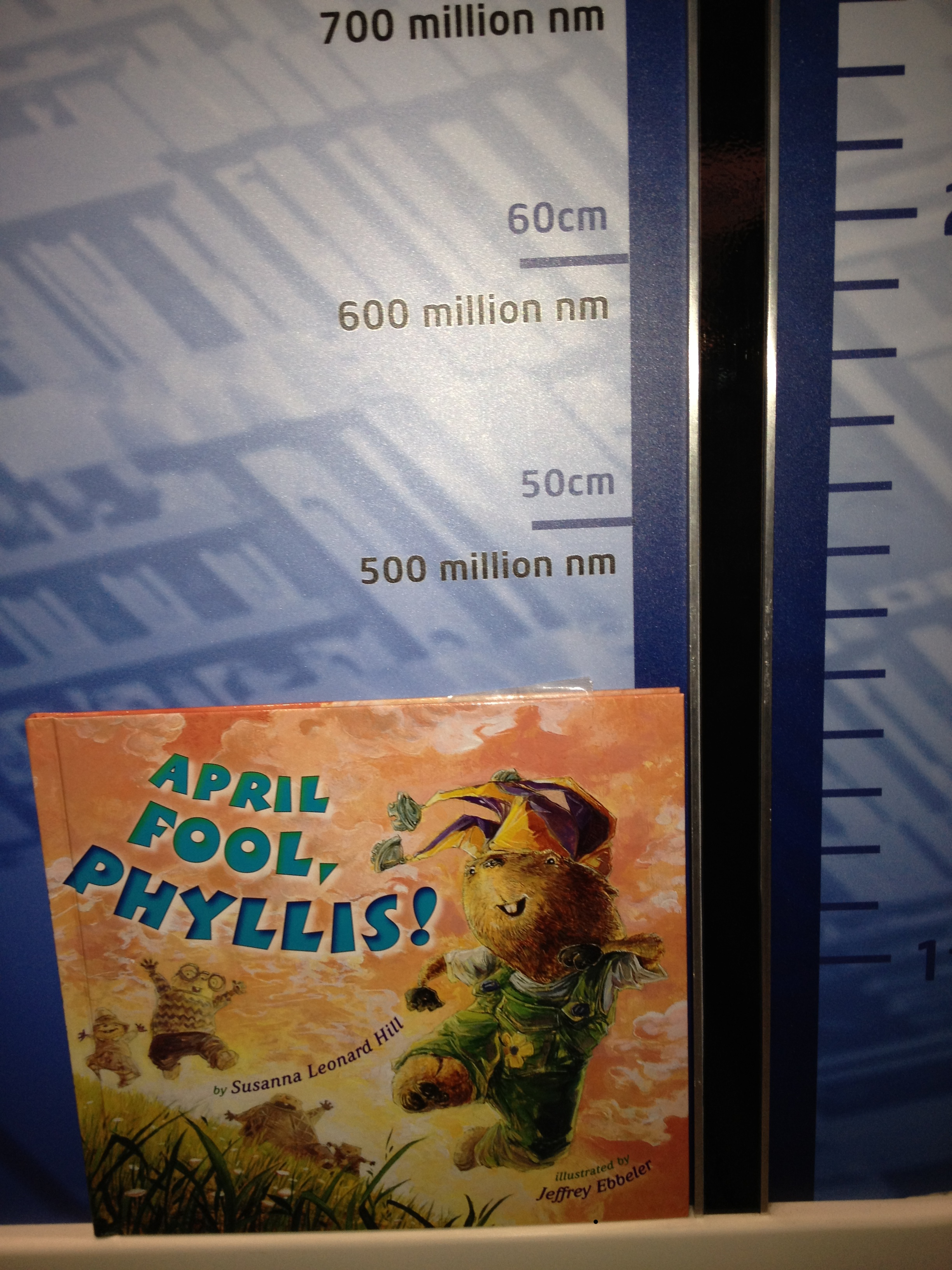 Phyllis had a very enjoyable time learning, but she doesn’t think she wants to be an engineer; weather forecasting is her first love.

In honor of Phyllis, we headed over later to the neighbors with kids in tow for story time and crafts. 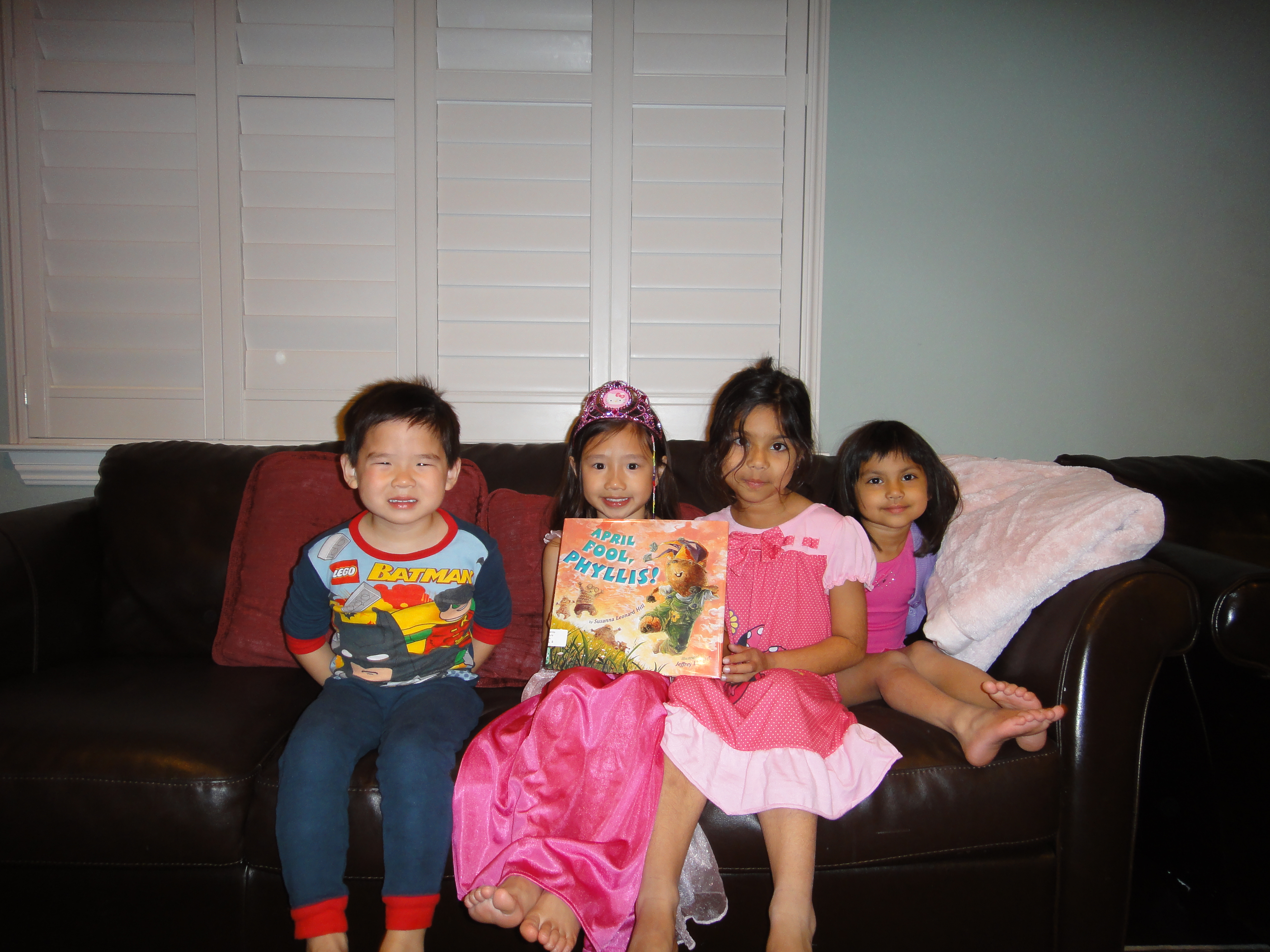 The kids enjoyed Phyllis’s company immensely. The loved the April’s Fool’s jokes and the riddles. Anjali, my eldest, has been pulling April Fool’s jokes since the reading, she can’t wait for April 1st to arrive. Following the reading the kids made some colorful portraits of Phyllis using this downloadable activity. 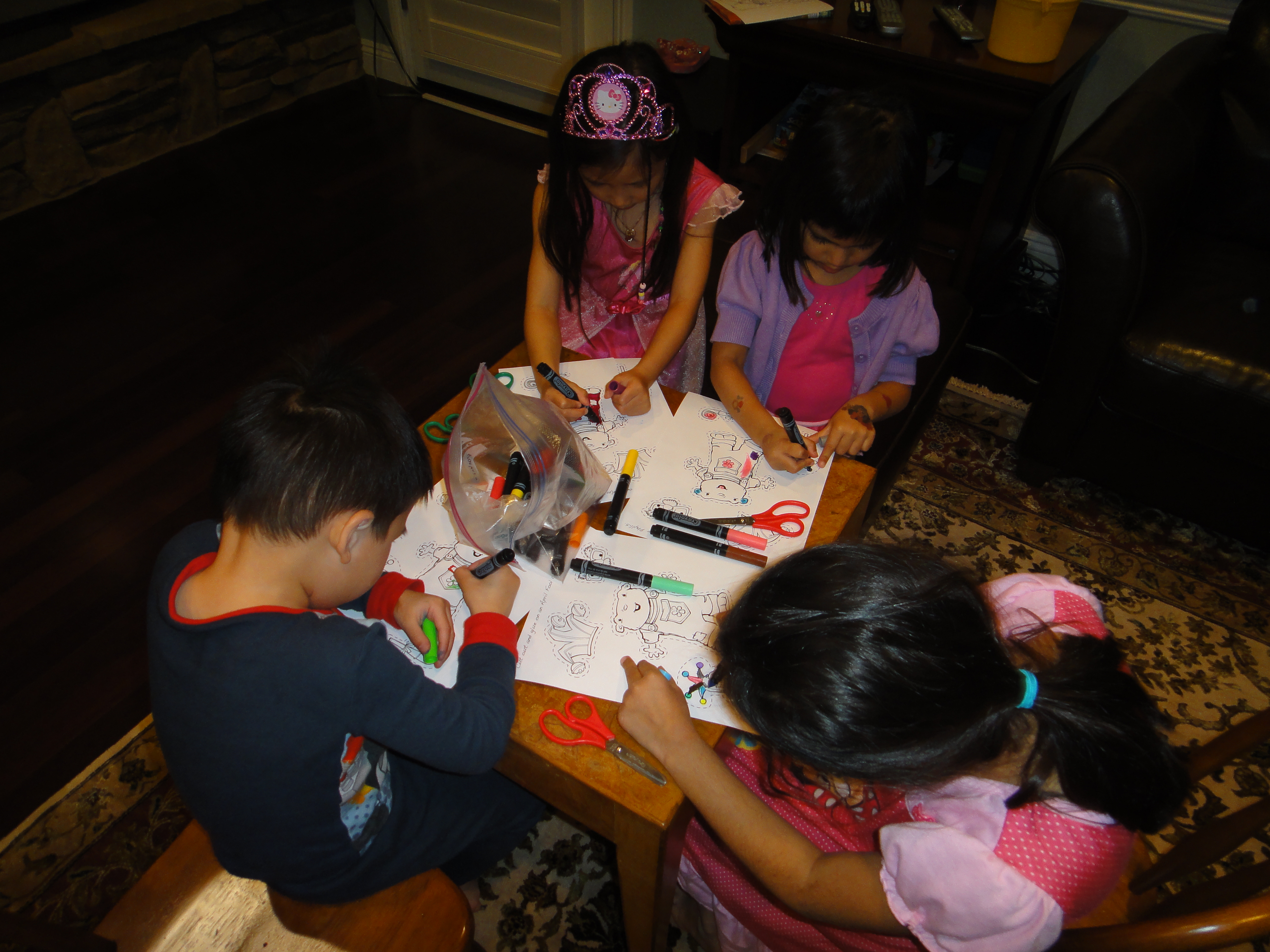 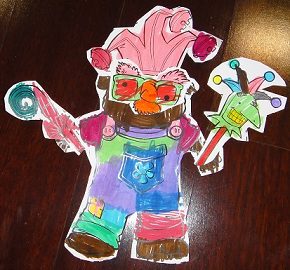 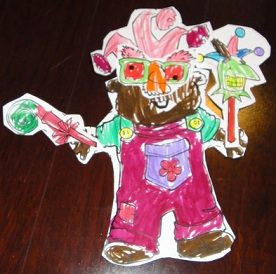 We enjoyed Phyllis’s visit very much and hope she had a good time too. We wished she could have stayed longer, but alas she still has many more places to visit. So we said goodbye and directed her to Clovis, CA.

No Responses to “Phyllis in Silicon Valley”