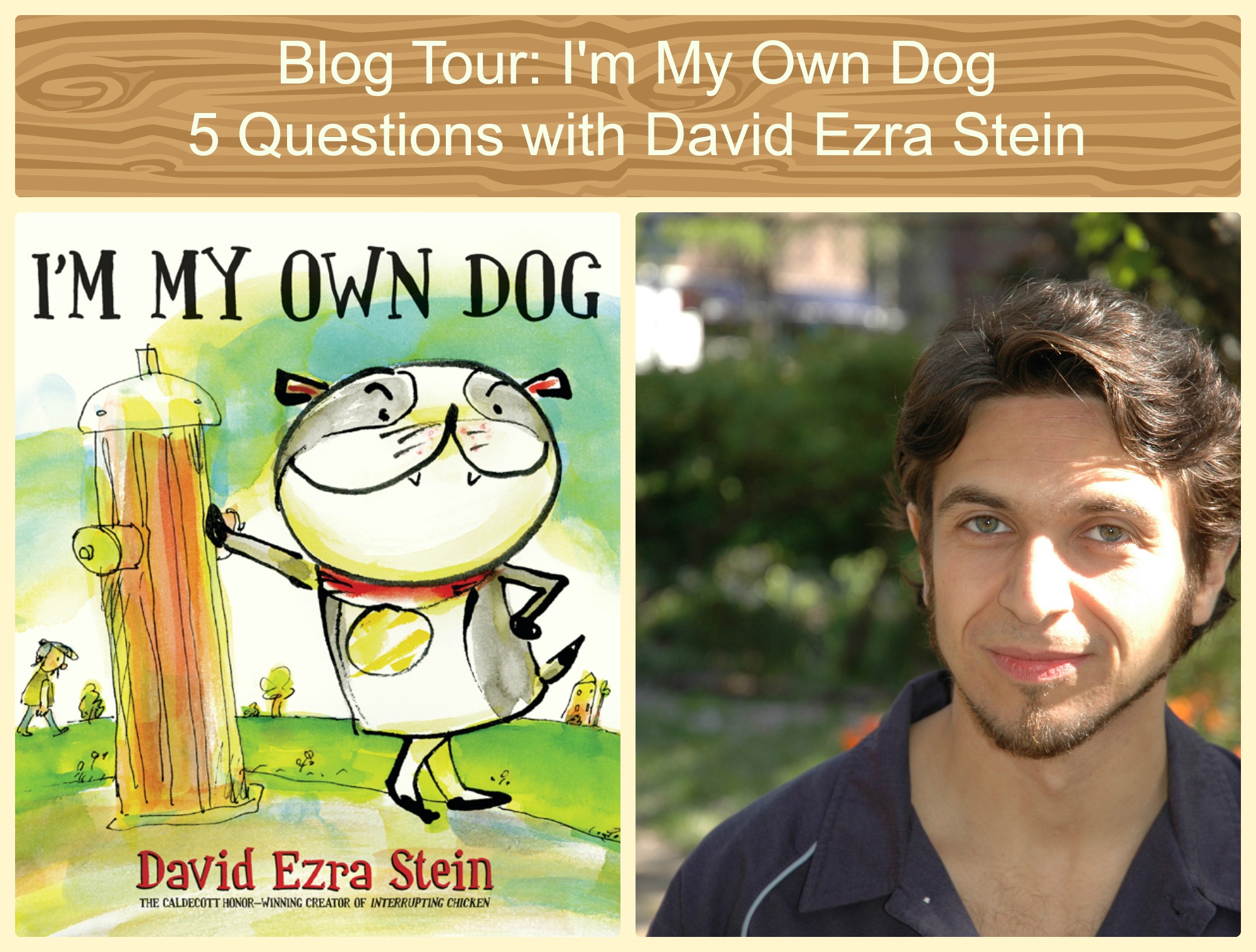 Last week I reviewed the hilarious new book I’M MY OWN DOG. Checkout the review and don’t forget to enter the giveaway! Today I am excited to share my interview with David Ezra Stein. The first book we read in our house by him was INTERRUPTING CHICKEN which was a constant request by my toddlers at that time. A few years ago I feel in love with his book BECAUSE AMELIA SMILED. I am constantly amazed my Mr. Stein’s talent in crafting engaging pictures books which are beautiful inside and out.

Q1) What aspects of childhood do you like to capture in your art and writing?
Hi Darshana! That is a lovely question. I guess I like to capture the storm of emotions that a kid feels every day. Frustration, elation, sadness. They all run so close to the surface for a child. Humor seems to come from these strong feelings. If you portray them in earnest, they can be hilarious. But that is not to say that they should be the butt of a joke, but rather, an example of a life lived to the fullest degree of passion. I like to create characters that CARE about something very much. It could be something that is not a big deal in the grownup world. But then, the grownup world has its fair share of trivia that one can get worked up about.

Q2) Who are your creative influences – in books, art, or any other media?
Oh, this is such a hard question. It’s kind of like: List the many, many foods that have ever nourished you. Anything that is strong, and funny, and touching, and colorful. So this includes textiles, Matisse, TV commercials, funny ‘80s movies, P.G. Wodehouse novels, Calvin & Hobbes comics, Tintin comics, Klaes Oldenburg sculptures, East African sculpture, Robert McCloskey, Uri Shulevitz, Sondheim, Gilbert & Sullivan—the list is different each time I write it!

Q3) As a beginning writer, I often hear write the story that drives you and not to worry about market trends. What advice do you have for beginning writers in finding that balance between what resonates with the writer and what is marketable?
Try to do something you’re fascinated by, or think is hilarious, or very scary, or whatever you are trying to evoke in the reader; try to come from that place yourself. What’s marketable is something people really want to read. And I think people want to see familiar things in a new way, and laugh. That’s what I try to do in my own work.

Q4) Your story “I’m My Own Dog” is so clever and witty. I love his personality. Can you tell us what inspired this independent character?
Thanks! He occurred to me as a voice in my head, speaking about himself. This is often how characters come to me. He told me the first few lines of the story: I’m my own dog. No one owns me, I own myself…. I was as attentive to this as possible, and tried to get it all down on paper as it was happening. Then I began the work of expanding him and his world. Anyway, I think he came from a desire to really master myself and my career. And to choose the way I respond to the challenges of life. That is true mastery, to me.

Q5) How is the dog handling his celebrity status? Is he begging for more stories?
Ha, ha! I have been knocking around a story where the man gets a cat as well. So far so good, but we’ll have to see if this book does quite well enough to warrant a sequel. It’s sort of up to the publisher.

David Ezra Stein is the creator of many award-winning picture books, including Interrupting Chicken, which was awarded a Caldecott Honor, Because Amelia Smiled, and Dinosaur Kisses. He lives with his family in Kew Gardens, New York. You can learn more about him at his website, or keep up with him on Facebook.

No Responses to “Blog Tour: I’M MY OWN DOG by David Ezra Stein”